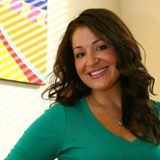 Heather DeLoach starred in the video for Blind Melon’s hit No Rain.  She’s dressed in a bee costume.  The video begins with the girls’ tap dancing routine.  Laughter from the audience causes the “bee girl” to leave in tears.  She wanders and dances through a city before ending up at a gate to a field full of “bee people.”

Now, Heather DeLoach is an actress.  She’s popped up in shows ranging from ER  to Reno 911, according to IMDB.  She maintains a Facebook page for fans who still remember her as the “Bee Girl.”

DeLoach is not the bee girl on the cover of Blind Melon’s self-titled album that features No Rain.  That’s Georgia Graham, who is the sister of the band’s drummer, Glen Graham.  The picture on the album was Georgia in 1975.  At the time of the filming of the No Rain video, she was 25.  That’s why she’s not the “bee girl” in the video.